The name corundum originates from the Sanskrit word kurivinda. It is used to describe the group of gemstones to which both ruby and sapphire belong. The chemical composition of corundum is aluminium oxide (Al2O3) with traces of various additional elements in traces, such as chromium, ferric iron & titanium. Corundum crystallizes in a hexagonal (trigonal) form with the six crystal faces meeting at 120 degrees. Gem quality corundum comes in all colours with red corundum described as ruby and all other colours described as a sapphire with the name of the colour as a prefix. Below are some of the physical properties of corundum.

Other important sources of rubies and sapphires are Mogok in Burma, China, Australia, Montana USA, and the ruby mines at Montepuez in Mozambique. 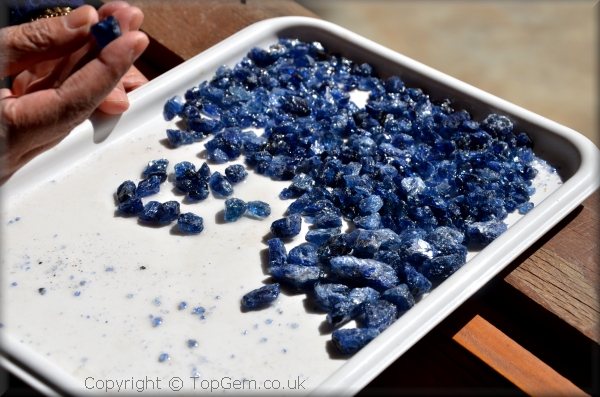 Bang Kacha to the east produces mostly green and golden-orange coloured sapphires. Some of the golden coloured stones can be quite stunning. There are small quantities of blue sapphires found here as are black and golden star sapphires.